The lineup of popular Fort Worth rockers JJ & The Rogues suddenly changed during the past two weeks. Half of the band - The Rogues - have decided to leave for personal reasons. The only remaining members are the two Js. While most bands face musicians coming and going, it doesn't usually happen while a group is trying to record a new album. Unfortunately for this group, that is exactly how it went down.

Before the turnover, the group consisted of Jameson Cockerell (guitar/vocals), Josh Townley (guitar/keyboards), Chris Carfa (bass), and Eric Navatil (drums). The group's first EP, Indifference, was released in 2009. It was widely received by both critics and fans. They were silent until May of 2011, when they came out with their second EP, Stare Down. It earned a 2011 Weekly Awards nomination for Best Comeback Band. They are currently laying down tracks for their next album, Sweet Talker.

Bassist Chris Carfa informed his band mates that he would be moving to Thailand to teach English. He warned them with enough time to start finding a replacement. They ended up selecting Nolan Robertson from The Hendersons to take over. Robertson is an exceedingly talented musician, and he will bring a lot of new ideas to the band. He has even been at the recording sessions, in hopes of making the transition go smoother.

After a full day recording session, Eric Navatil let the group know that he was planning on moving to Wyoming in only two weeks. This came as a complete shock to both Cockerell and Townley. They do say, however, that they have no hard feelings towards their drummer.

As of right now, both Js are trying to recruit Zach Mayo as their new drummer. Like Robertson, Mayo is also from the now-on-hiatus group The Hendersons.

With the addition of these new members, the sound of JJ & The Rogues is bound to drastically change. It may be a healthy transformation to the group. We'll see how the fans respond to the new lineup. 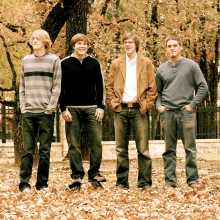 When Patrick and Melanie Higgins' five-year-old daughter was diagnosed Glioblastoma Multiforme, their world came tumbling down. Not only was their daughter, Maddie, fighting for her life, but the family was also quickly finding out how expensive medical treatment actually is. Thankfully, the couple has some good friends in their court. Several Fort Worth based bands came together to raise awareness and money for little Maddie.

The Fight for Maddie was formed by local musicians who just wanted to help out the little girl. This weekend, The Octopus Project, Peopleodian, Lower Dens, War Party, Carey Wolff and Doom Ghost will be performing "Phase 4" for the benefit. All proceeds from the show go directly towards a medical fund for Maddie, split evenly with a program to spread awareness of this rare brain disease.

While it's too late to make it to this weekend's show, the Fight for Maddie Foundation is planning another benefit on April 17 in Denton. So far, the concerts have brought much needed financial and emotional support to a family in crisis.

Glioblastoma Multiforme is an aggressive and malignant brain tumor. It is the most common type of brain tumor in adults, but it is very rare in children. The disease is often fatal, but modern medicine has been able to save many people from this form of cancer. Little Maddie is doing everything she can to beat this disease. She has the best oncologists helping her, and the outpouring of support she has received is astounding.

For more information on the Fight for Maddie and upcoming benefit concerts, visit their Facebook page. The bands that are donating their time and talents for this little girl are nothing less than angels.

Garage rock and science fiction join forces at last in this new video from Mind Spiders. This fantastic track is off the band's new LP Meltdown, out now on Dirtnap Records.

Mind Spiders - "Wait For Us" from stereogum on Vimeo. New music from my favorite Fort Worth post-rock outfit! This time they bare their teeth a little further than on their last release, but they still maintain a fantastic sense of pacing and gradual doom.
35 des Refuses will perform the same weekend as 35 Denton Festival.

35 Denton is featuring several of the most popular bands in the Metroplex, but what about the great acts that weren't invited to play?

At least two dozen bands who were not selected to perform at 35 Denton, have joined together to put on their own festival. They call themselves 35 des Refuses, and their concerts will be held during the same weekend as the festival.

All of the bands, with the exception of Fab Deuce, applied to play but were denied a set. Instead of taking the weekend off, they decided to throw their own concert. The organizer of the event, Richard Haskins of The Wee-Beasties, told media that their festival is not in retaliation to 35 Denton. Instead, they want their acts to be a welcome addition to the festival. His goal is to showcase local music to the public.

Those in charge of 35 Denton are also excited for this line-up. There are no hard feelings between the two organizations.

Brave Combo will be headlining the show. Their fun, upbeat polka music has been a hit in the DFW area for many years. It is rumored that they will begin their set with Christmas music. Yep, you heard that right, Christmas music in March.

Other bands that will be performing include Band Nerds, Lovesick Mary, Juicy the Emissary and Whiskey Tongue Burlesque.

Unlike the festivities at 35 Denton, the concerts by 35 des Refuses will be completely free. The bands will be performing from noon to 9pm at A Creative Art Studio in Denton on Saturday, March 10. The musicians have even combined funds to provide free beer and food to the attendees.

In an effort to learn more about the music of my hometown, I've been doing a bit of research. I know it's hard to believe that a girl born and raised in Cowtown cannot stand country music, rodeos or line dancing - but that's me! I was desperate to find out if anyone famous has come out of this one-horse town (ok, so it's MUCH larger than that). To my surprise, there have been several successful Fort Worth musicians, and no, not all of them sing about dogs, divorce and pickup trucks.

Anyone from Fort Worth has heard the name Van Cliburn. He is a virtuoso pianist that has become an icon for the city. Van Cliburn won several piano competitions that launched him to international fame. Every year, we pay homage to his talents by hosting the Van Cliburn International Piano Competition. Only the best pianists from all over the world participate in this spectacular musical event.

Successful singer/songwriter T-Bone Burnett was born in Fort Worth in 1948. He started his career by playing guitar for Bob Dylan in the Rolling Thunder Revue. Soon he began his own solo career, which progressed to producing. A few of his famous clients include John Mellencamp, Counting Crows and The Wallflowers. He added music to many films, such as The Big Lebowski and Walk the Line. As if that weren't enough, many of his songs have been covered by other music greats over the years.

If you don't recognize this name, then you are truly not American. Kelly Clarkson became the first winner of the popular singing competition American Idol in 2002. She quickly became a household name. Ever since her big win, Clarkson has been releasing hit after hit. To date, she is the single most successful American Idol winner, with a career that doesn't seem to be cooling down any time soon.

There are actually more that can be added to this list. It feels good to know that Fort Worth has contributed to the music world with more than just cowboy boots and southern twangs.

I've been racking my brain for upcoming Fort Worth concerts that are worth mentioning, and I've been increasingly disappointed. I'm tired of the Fort Worth scene being full of karaoke, line dancing and frat bands. It's time for Cowtown to venture into some of the better shows that Dallas has to offer.

Just when I thought I would never find anything to talk about, I came across a show at the Scat Jazz Lounge. I'll be the first to admit that jazz is not always my genre of choice, but the performer Hashem Assadullahi is absolutely amazing and worth checking out.

Before I start talking too much about the show, I have to add a disclaimer. Hashem is a good friend of mine. I met him when we were both undergrad music students. He is a super talented saxophonist, and he is also one of the funniest people you will ever meet. With that being said, this is a show that any jazz lover should make a point of seeing.

A Texas native, Hashem Assadullahi is versed not only in jazz, but also classical, big band and contemporary music. He can adapt to any genre, which as allowed him to perform with some great musicians, including The Platters, Ron Miles and Ben Monder. He not only continues to perform with his own band, but he is also very desired by jazz musicians all over the country.

The show starts at 8 PM on Thursday, February 23. Sit back and have a martini, as this is a 21 and older show. Dress nicely, as the Scat Jazz Lounge does not allow baseball caps or torn jeans. I know that I'll be getting there early to grab a front row seat. Hope to meet a few of you music lovers there!

So there's this trilogy of albums in progress that are powerpop operas about Street Fighter. And they are ear candy. And this is part of the second one.

Singer/pianist Ben Folds will be performing with the Fort Worth Symphony Orchestra on April 27 at the luxurious Bass Performance Hall for a one-night only engagement. Folds will play his most popular solo hits, with the symphony accompanying him.

This is not Ben Folds first time to perform with a live orchestra. In recent years, he has traveled around the world to play with some of the most popular symphonies. Audiences are amazed with his diverse talent, as he transforms pop music into compositions suitable for strings, winds and brass.

Ben Folds first found fame in the '90s as one of the members of the popular Ben Folds Five pop trio. The group became a platinum record seller, with their album Whatever and Ever Amen in 1997. Folds went solo in 2001.

Currently, Ben Folds is best known for his role on the NBC show The Sing-Off, where he searches for the best a cappella groups along with several other musical star judges. He is known for being the nerdy judge, showing off his music theory knowledge to the contestants. The show is preparing for its third season.

Tickets for the show went on sale Friday, January 27. There are still some seats available, but we don't expect them to last for long. Ben Folds fans have been waiting a long time for him to return to the Metroplex. Buy your tickets from the Fort Worth Symphony box office. The cheap upper gallery seats are only $29, but be prepared to shell out at least $99 for front row orchestra seats. The concert starts at 8 PM on Friday, April 27. Don't miss out on this unique musical experience!